Saved Searches Advanced Search
All Library locations have re-opened with limited service as of June 1, 2020.
Print 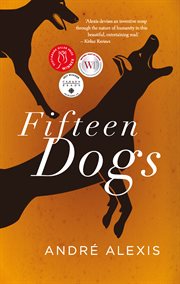 I wonder, said Hermes, what it would be like if animals had human intelligence. -- I'll wager a year's servitude, answered Apollo, that animals - any animal you like - would be even more unhappy than humans are, if they were given human intelligence. And so it begins: a bet between the gods Hermes and Apollo leads them to grant human consciousness and language to a group of dogs overnighting at a Toronto vet-erinary clinic. Suddenly capable of more complex thought, the pack is torn between those who resist the new ways of thinking, preferring the old 'dog' ways, and those who embrace the change. The gods watch from above as the dogs venture into their newly unfamiliar world, as they become divided among themselves, as each struggles with new thoughts and feelings. Wily Benjy moves from home to home, Prince becomes a poet, and Majnoun forges a relationship with a kind couple that stops even the Fates in their tracks. Andre Alexis's contemporary take on the apologue offers an utterly compelling and affecting look at the beauty and perils of human consciousness. By turns meditative and devastating, charming and strange, Fifteen Dogs shows you can teach an old genre new tricks.
Publisher: [United States] : Coach House Books : Made available through hoopla, 2015
ISBN: 9781770564039
1770564039

Lots to tease your brain in this one. I enjoyed finding the dogs’ names in the poems & enjoyed the characters of many of the dogs. Friends in my book club said the author did a great job reading this as an audiobook so I’m now listening to it & enjoying it all over again - have definitely found a new author to read more of.
All that being said, I was disappointed in how Alexis got a couple of things really wrong with regard to dog breeds (& one thing with regard to biology & chemistry)....& much of what happens in the pack seems highly unlikely. Suspending disbelief was a struggle (I know, I know - it starts with Hermes & Apollo in the Wheat Sheaf! but still, the rest is supposed to be something that might really happen....)
SPOILERS: beagles, being hounds, eat EVERYTHING - no way would a beagle be the one to lead the pack to a “death garden”, having previously avoided them himself. And no way would the amount of warfarin in traps designed to kill mice be enough to kill a beagle. Just a couple of quibbles - but I also found it unbelievable that the dogs were so violent. Still, an enjoyable read/listen overall.

If you are an animal rights activist you'll probably hate it. If you don't want mythology mixed in with your storytelling you won't like it. For the rest of us, it's a lot of fun to see old traditions and assumptions turned upside down. These dogs are forced to figure things out as humans would, and some just can't cope. What happens to Atticus is especially painful, but within the novel's bounds as set by Alexis. I'll be looking out for this writer.

Horribly violent. I wish I hadn't read it.

I really enjoyed this book. It was both interesting and an easy read. I did not find it hard to follow which dog was which at all. Would recommend it!

my earlier comment has disappeared. I am a dog lover and had anticipated this book with pleasure. What a letdown. I thought it was morbid. Won't be reading any more of this author.

I got thru 2/3 before I put it aside. An interesting premise but not well enough fleshed out - I found I was having trouble remembering which dog was which, and I really didn't care.

Follow 15 bewitched dogs through Toronto.
Gods Hermes and Apollo conduct an experiment on a group of dogs, and grand them human consciousness and language for a year in order to determine if they would be as unhappy as humans or if their apparently natural happy disposition would prevail.
Beware : this book might make you go through many strong emotions!

I am not usually drawn to stories about animals, and was especially reluctant to read this as I hated the last dog book I read (Art of Racing in the Rain). A friend recommended it for its philosophical elements so I took the chance and ended up loving it. I really admire authors who can convey an idea of what it might be like to view the world from a particular animal’s point of view, and Alexis does so very well. The dogs come across as very unique characters, relatable but still very doggish -not just humans trapped in dog bodies. I enjoyed the philosophical aspects of the book as well...and of course Greek Gods are always fun to keep things moving along.

Some parts moved me to tears and others made me laugh out loud. It’s a wonderful book, but as another comentator noted, may be a bit intense if you are a soft-hearted dog lover as some parts are very violent.

The book is a treatise on what make humanity different from other animals, namely, it asks: what defines humanity? To do this, the author looks at people and their relationships through the eyes of dogs that have been given the gift of human speech.

With this device, the author can deal with issues like mortality, death, time, dominance, master and servant (servitude), status, and the most important question of all, what is the nature of love?

I think dogs were chosen for this task because many people feel a strong connection to their dogs. The author uses these emotions to explore the things that define man and beast. “There were a thousand questions [the dog known as] Majnoun would have liked to ask. Are dogs greater than humans? Which beings are smartest? Why is there death? What is the purpose of life?”

The work of the three sisters - Clotho, Lachesis, and Atropos - is generally straightforward. The first spins the thread of a life. The second draws out the length of the thread each being will have. The third cuts the thread and ends that being's time on earth. If often happens that lie threads are intertwined - most commonly, the lives of husbands and wives, which is why they often die together or close together in time. And in fact Nira's and Miguel's threads were almost as closely intertwined as Nira's and Majnoun's. Though Nira and Miguel were meant to live longer than Majnoun, the threads of all three lives were so wound up, so similar in hew and thickness, that Atropos was not certain whose life would end if she used her scissors.

One evening in Toronto, the gods Apollo and Hermes were at the Wheat Shaft Tavern.

Perfect understanding between beings is no guarantor of happiness. To perfectly understand another’s madness, for instance, is to be mad oneself. The veil that separates earthly beings is, at times, a tragic barrier, but it is also, at times, a great kindness.

AlieGrace thinks this title is suitable for 14 years and over

trevordunfordswife thinks this title is suitable for 15 years and over

In a Toronto tavern, the gods Apollo and Hermes strike a bet. When Hermes wonders what it would be like if animals had human intelligence, his brother Apollo wagers a year’s servitude that the animals—any animals Hermes would like—would be unhappier than humans if given human intelligence. The wager is struck, and fifteen dogs in a nearby animal shelter suddenly gain human consciousness—all while still in possession of their canine urges and instincts. As they develop a new language to convey their transformed understanding of the world, the pack becomes divided between those who embrace the new way of thinking and communicating, and those who wish to resist change at all costs. The gods watch—and occasionally interfere—as the dogs try to navigate this abrupt transition. But will any of them die happy?

what a boring and predictable book. I read it based on the comments but it was very predictable. The dogs were granted special power based on a wager between two gods. They dont get along. one dog wants to be the leader, kills a no of dogs and so on

There are no notices for this title yet.

Find it at my library