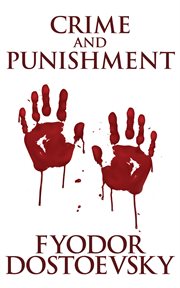 Rodion Romanovich Raskolnikov is a former law student living in extreme poverty in Saint Petersburg. Upon succumbing to his debt, he devises a plan to murder a wealthy, elderly pawnbroker. After Rodion commits the murders, he must address his guilt and decide whether his horrible sin was worth the sacrifice. This novel, considered the first of Fyodor Dostoevsky's mature writings, helped bring Dostoevsky to the forefront of Russian writers.
Publisher: [United States] :, Dreamscape Media, LLC,, 2018
Made available through hoopla

I read this classic many years ago. I was enthralled by the plot and characters - good versus evil as the main issue.

Crime and Punishment by Fyodor Dostoevsky, translated by Richard Pevear and Larissa Volokhonsky, is an amazing novel that is narrated by a murderer, which allows the readers to experience the highs and lows of the main character’s psychology. Raskolnikov is a 23-year-old ex-law student who impulsively brings himself to kill an old pawnbroker and her stepsister. Raskolnikov narrates his tormented thoughts as he grapples with the reality of his crime and readers can see how his mental state affects the people around him. The length of the book can seem daunting to some, but Raskolnikov’s inner monologues and the stories of multiple other characters involved in his life pull together into a novel that will keep you continuously interested. Several radical theories are explicitly and implicitly brought forward throughout the book that encourage inward discussion in the readers. A question that consistently arose while I was reading the book was one regarding the morality of Raskolnikov and whether he was a good person tormented by his own conscience or an evil person who soberly accepted his crime. Per my experience, Crime and Punishment has lived up to its fame as a remarkable psychological novel through Pevear and Volokhonsky’s translation. I rate this book 4.5/5 stars and recommend it to readers ages 15+ as the language is complex but can still be followed.
@ilovefood of the Hamilton Public Library's Teen Review Board

This was a wonderful classic! I loved the variety of characters and personalities that Dostoevsky used. That fact that this book still rings true for life today proves its exceptional worth.

might be Dostoyevsky's most accessible work. "Razhumin woke up next morning at eight o'clock, troubled and serious. He found himself confronted with many new and unlooked-for perplexities. He had never expected that he would ever wake up feeling like that. He remembered every detail of the previous day and he knew that a perfectly novel experience had befallen him, that he had received an impression unlike anything he had known before. At the same time he recognised clearly that the dream which had fired his imagination was hopelessly unattainable---so unattainable that he felt positively ashamed of it, and he hastened to pass to the other more practical cares and difficulties bequeathed him by that 'thrice accused yesterday'. ." " 'He-he-he!' Luzhin laughed, maliciously."

Absolutely amazing. Truly an insightful look into human nature. This book was written over 100 years ago in Russia, yet I swear some of the characters could have been from modern day America.

Dostoevsky has a way of working in little stories into the larger narrative that I find fascinating and entertaining. Every chapter seems to contain a little vignette that details the life of Czarist Russia.

St. Petersburg itself is a character in the story. The impression you get of the city is that it is cold, ugly, and just generally inhuman, which contributes much to the motivation of the main character.

If you took out all the characters who exist just as political mouthpieces or uninteresting interludes (I'm not even convinced that Avdotya or her suitors are necessary characters) this would be a really interesting investigation of the psychology of ends justifying means. But it's varyingly fascinating and tedious, and I have to wonder if this story simply needs an update. Outside its historical context (any book which needs 30 pages of endnotes to be explained is really only of historical importance) this is actually not a very well told story. That said, large parts of it are fascinating, and it has a delightfully gruesome style that I'd never experienced before (I'm not a big reader of fiction). I'm sure some will disagree with me, but I'd still say that even if you're only reading it to say you've read it, there's something to enjoy here. It's only occasionally the kind of book you have to trudge unwillingly through to get to the good parts.

This is Dostoevsky at his best - at least as far as this reader is concerned. This is a ‘complex’ story (in many respects) certainly with respect to the story line: and, in the ‘typical’ Russian style, full of boiling emotion, honor, degradation and mystery.

What an amazing read. Should you find yourself struggling to keep up with the characters, continue through. It will come together and it WILL be worth it!

Possibly one of the best books I have ever read. I could not put this book down, and while some say it is a drag of a read; for me, this book was an actual page-turner. Dostoyevsky does such a fantastic job with narrating the inner thoughts of Raskolnikov. This book made me want to read more classic literature, I was so moved by this book that I reached out to my English teacher to have a lunch discussion about the various themes and ideas in this book. It is also important to note the time period, as well as Dostoyevsky's own political and philosophical ideas, as they give context for the book and a lens through which to read the novel. I can only give this book the highest recommendation for anyone looking to read a master work of literature.

blue_fox_2162 thinks this title is suitable for 15 years and over

ea304gt thinks this title is suitable for 17 years and over

Greisi thinks this title is suitable for 17 years and over

biblioisseur thinks this title is suitable for 17 years and over

Nico_Laliberte thinks this title is suitable for 18 years and over

You see, we educated people have no specially sacred traditions, unless indeed one of us invents them for himself from books -- or copies them out from some ancient chronicles. But those are mostly scholars, eccentric fools, in a way, so that to a man of the world it's even unbecoming to be like them.

To go wrong in one's own way is better than to go right in someone else's.

In a morbid condition of the brain, dreams often have a singular actuality, vividness and extraordinary semblance of reality. At times, monstrous images are created, but the setting and the whole picture are so truth-like and filled with details so delicate, so unexpected, but so artistically consistent, that the dreamer, were he an artist like Pushkin or Turgenev even, could never have invented them in the waking state. Such sick dreams always remain long the memory and make a powerful impression on the overwrought and deranged nervous system.

A man makes a decision to murder an old woman and suffers from terrible guilt.

There are no notices for this title yet.

Find it at my library